How to Read the Fletcher Munson Curve in 3 Easy Steps

Fletcher Munson curves are sets of contours on a graph used to explain how humans hear across different frequency curves. Reading values from the contours are straight forward and are described below in 3 easy steps.

So, how do you interpret the contours on a Fletcher Munson graph?

Let’s now look at some examples:

So, for a loudness level of 80-phons, a human perceives a frequency of 150Hz as having an SPL of 80dB.

So, for a loudness level of 20-phons, a human perceives a frequency of 90Hz as having an SPL of 40dB.

Here are some other examples to look up:

And, the lookup can work the other way too:

Again, for a loudness level of 60-phons, a human perceives a frequency of 200Hz as having an SPL of 60dB.

So, for a loudness level of 80-phons, a human perceives a frequency of 6.2kHz as having an SPL of 80dB.

You now know how to read values off a Fletcher Munson graph, so next, we’ll discuss the contours in more detail, and figure out what use they are to us in the real world. And especially how they can help us with our mixing.

Contour Shapes and What they Show Us

The actual value plotted on the Fletcher Munson curves is generally not much use to home studio mixers like you and I. However understanding the principal and acoustic nature of how humans perceive frequencies at different pressure levels is very important when mixing music.

We are going to start with the general shape of each contour. Actually, although each phon curve is in a different place on the graph, the form of each one is pretty much the same. If you need to memorize the curves, it could be useful to imagine it like this:

You are watching skate-TV, and Tony Hawk is going to launch down a wave ramp. The TV camera shows Tony at the top of the ramp on the left of the screen, it’s a steep drop down with a very cornered top edge. Tony launches down the ramp picking up speed as he goes before the wave ramp rises gently before it takes a dramatic dip.

In Tony’s final part of the ride, with the remainder of his momentum, the ramp rises one last time, and Tony makes it to the summit. Gnarly! (Disclaimer: This post is not endorsed by Birdhouse or Red Bull). Take a look at the diagram right at the top of the page again, you will get the idea.

Curves have a higher ‘range’ (on the SPL axis) at lower phon levels, therefore, mixing at more moderate volumes means that we should be able to distinguish frequencies in our mixing more comfortably. If you don’t already mix using the K-20 setup, look into it – it is a huge step forward for home mixing.

One way around low-end mixing is to get a good pair of headphones or augment your listening with some graphical frequency analysis. The low-end SPLs are also high compared to mid-range frequencies, illustrating that we hear low-end frequencies more easily.

At high frequencies, especially around the 10kHz bump, the curves rise dramatically. The curves show us that we hear, or more correctly perceive to hear, high-end frequencies more easily.

Compared to the lows and highs, the mid-frequency range is relatively flat (except for that dip at 4kHz). This indicates that listeners can distinguish mid-range well and is why mixing music requires us to make sure mid-range frequency instruments fight for space in the mix. Mixing engineers often tell you ‘Music Lives In the Mid Range’ and is why the Aurotone Mix Cube can be a great help in mixing at home.

Why Does My Mix Sound Better When I Crank Up the Volume?

So, the 100-phon equal loudness contour has less variation in SPL for low, medium, and high frequencies meaning that as humans, we can hear more of the ‘music’ at higher volumes, compared to lower volumes. Therefore, music at higher volumes appears to have a fuller frequency range, which as humans we can really appreciate. That’s why music in your home studio, on headphones or driving around in the car sounds better when it is blasting out.

On the flip-side, mixing music at high volume is not a good idea as it is much more challenging to judge the differences between frequency bands and values. Mix using the K-20 system and set your nominal volume to about 82dB.

As we have seen, the Fletcher Munson graph has several phon, or equal loudness, curves. The first thing to note is that each phon contour passes through its own value at 1000Hz. For example, the 40-phon contour intersects the 1000Hz frequency at an SPL of 50dB. The 60-phon at 60dB, 80 at 80, 100 at 100, and so on. The phon can always be referred back to a curve that passes through 1000Hz.

The academic definition of a phon states that a phone is a unit of perceived loudness. This definition is important because of the word ‘perceived’. Our mixing needs to consider the ‘perceived’ loudness of frequencies in our mix – it’s the main reason why our own ears are always the best judge of what sounds good. 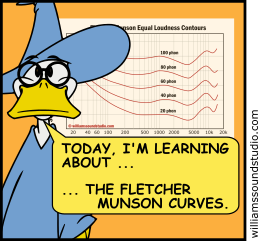 What is ISO 226? ISO 226 is the International Organization for Standards (ISO), acoustics standard for Normal equal-loudness-level-contours. The ISO standard follows on from the pioneering 1933 research of Fletcher and Munson, 1937 work of Churcher and King, and 1956 work of Robinson and Dadson. In 2003 the ISO standardized the analysis of the early pioneers and brought it up-to-date with additional studies that had been carried out around the world. The research to produce the curves in ISO 226 is based on human listeners between 18 and 25 years old being exposed to pure frequency tones, and their subjective, comparative responses to loudness levels.

How are Fletcher Munson Contour curves put together? The human listeners are subjected to a sound source, in front of them, of a set of continuous frequency tones, at rising and falling Sound Pressure Levels (SPL). The listeners are asked to judge when Tone A and Tone B are of equal loudness, and the comparisons are used to generate the data points to construct the curves for each phon.

Back in 2009, I bought myself a copy of Pro Tools and recorded some home made music. It was challenging to start with, as I had no idea what I was doing. I made many mistakes on my journey - some fun, some expensive, and many time-consuming! I find running a Home Music Studio a fascinating and rewarding hobby and still enjoy it every day. This website is where I’d like to share everything that I’ve learned.

This site is owned and operated by Tim Williams. WilliamsSoundStudio.com is a participant in the Amazon Services LLC Associates Program, an affiliate advertising program designed to provide a means for sites to earn advertising fees by advertising and linking to Amazon.com. This site also participates in other affiliate programs and is compensated for referring traffic and business to these companies.
Copyright © 2011 ‐ 2021   williamssoundstudio   All rights reserved.